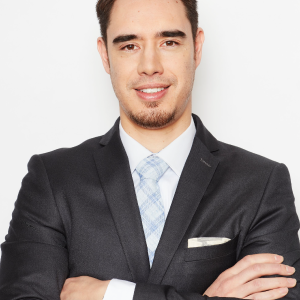 JR Dar Santos received a Juris Doctor degree from Thompson Rivers University in 2021. Prior to attending law school, he worked as a Claims Examiner at ICBC for several years managing a caseload of highly complex personal injury claims. It is there where he discovered his passion for the law which motivated a career change towards the legal profession. In that capacity, JR attended dozens of mediations which included complex multi-party disputes.
During law school, JR worked at the Thompson Rivers University community legal clinic for a semester where he provided advice to people who could not otherwise afford legal services. There, he advised on a variety of issues including uncontested divorce, human rights complaints, and advanced planning such as wills and powers of attorney.
Outside of work, JR enjoys spending time with his wife and daughter. He is an avid sports fan and hopes to one day see the Canucks win a Stanley Cup.