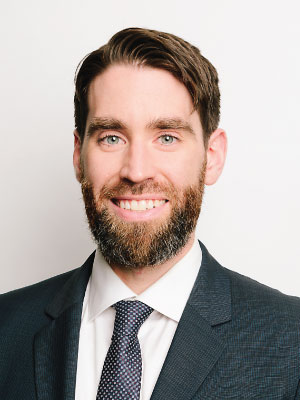 Trevor was raised in Halifax, Nova Scotia. He received his BA in Political Science from Dalhousie University in 2010. He received his JD in Law from the University of New Brunswick in 2014. Since his call to the Bar, Trevor has worked exclusively in civil litigation and Insurance Law. His practice focuses primarily on insurance defence litigation, however, he has experience working on both the plaintiff and defence sides of personal injury litigation. He has appeared in the Supreme Court of Nova Scotia and the Small Claims Court of Nova Scotia. Trevor was called to the Bar of British Columbia in 2017.

Away from work, Trevor enjoys spending time with his wife and family. He is an avid reader and enjoys listening to all types of music. Trevor enjoys playing every type of sport, but particularly hockey. His hockey career included playing Junior A for the Truro Bearcats and Sackville Junior Blazers. Trevor’s other hobbies include hiking, and spending time with his dog. Trevor enjoys giving back to his community and has volunteered with the Canadian Progress Club, United Way of Canada, and Right to Play.